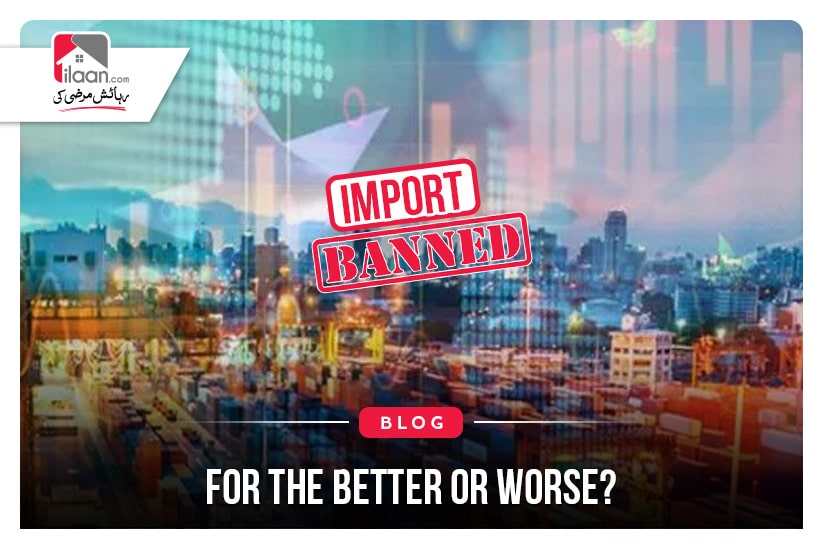 With the imposition of a hefty ban on more than three dozen non-essential luxury items, emergency plans have been initiated to stabilize the tumbling economy. Last month, the information and broadcasting minister, Maryam Aurangzeb said, there is an emergency situation and Pakistanis will have to make sacrifices under the economic plan. This will have a quick impact on the country’s foreign reserves. The minister made another observation that the dependency on imports was not helping in stabilizing the country’s economic condition either. Therefore, the government will soon be announcing an export-oriented policy, benefitting the local industry and producers, and generating both employment and income. This change, however, isn’t sudden. All such policies are being placed to counter the rapidly depreciating value of the Pakistani Rupee which currently stands at a historic low of 201 against the US Dollar. This depreciation has been linked to the rising import bill, growing current deficit, and depleting foreign exchange reserves. This is why the government plans to introduce policies promoting export while cutting down the costs of imports.

The list of items facing an import ban includes:

All these items have been categorized as ‘Luxury Items’, and with their ban, it is hoped that the currently faltering economy can regain its balance. Added to that, this import ban has been imposed to target the country’s elite, saving up to $6 billion. Business leaders, however, said the country must seek consent from the World Trade Organization, to regulate international trade.

However, the real question still stands. What will the ban on luxury items achieve?

Will it amount to anything at all? Truthfully, the effect is yet to be observed, granted, the claims made by the new PM point toward a much considerate future for the middle and lower classes, but the predictions say otherwise.

The PM claimed, that the ban on the import of luxury items will save the country’s ‘precious foreign exchange’, but the ban on all such imported items will only curtail the monthly import bill by $200-$300 million which barely even makes up 5% of the monthly import bill of $6 billion. Added to that, this prohibition will not be imposed in rupees or through a barter mechanism by land routes.

This decision has been met with backlash from prominent figures as well. Former Senior Vice President of the Pakistan Chamber of Commerce expressed his disapproval of this decision by claiming this was a prudent step taken by the government. Furthermore, he deemed paying off the international debts necessary if the government wants to save the dwindling foreign exchange.

This ban will also create policy instability, reducing the incentives provided to invest and innovate. In particular, import approval requirements incentivize rent-seeking and favor large firms that can devote more resources to navigate the system to secure timely approvals.

All these restrictions have been imposed with the intention to curb imports, however, leakages are still likely to occur, through substitution, misreporting, as well as smuggling. Substitutions are also likely to occur for example the shift from CBU phones and cars to CKD and semi-KD phones and cars. However, the extent of this restriction will depend upon the conditions of the SBP approvals.

This ban is also somewhat counterproductive due to the increased incentives for importers to now misreport shipments, and promote smuggling. Added to that, the productivity of several different firms will reduce to the unavailability of several products, which might cause the reversal of this policy.

Lastly, it will also promote an anti-export bias. The import ban is creating additional market power which can be obtained by the domestic producers focusing on the domestic market. This is why the combination of the ban and the import approval requirements increases the relative profits of selling domestically. So, the combination of the ban and export approval requirements increases the relative profit obtained if the products are sold domestically rather than being imported.

An import ban will prove to be a lot more significant as compared to an increase in duties. The effect of the import approval requirements is uncertain however since it will depend upon the likelihood of receiving the approval as well as its speed.

The anti-export bias this will create does not require a firm to switch from exporting to selling domestically because of the higher margins available in the home country. However, this is only one possibility out of the many.