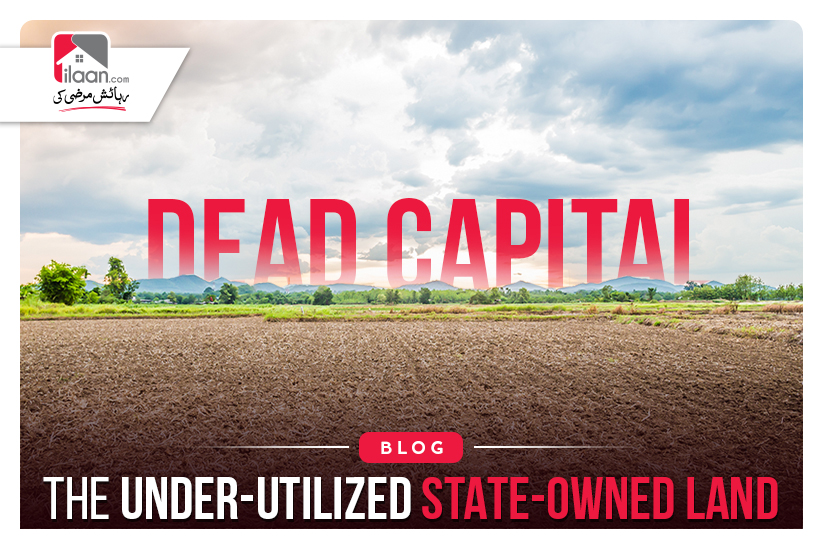 Any state-owned land which is in line with the needs of cities is required to be efficiently managed. However, if underutilized or used for unproductive purposes then it becomes a liability that not only negatively affects the state but also restricts the development of the cities.

The majority of state-owned land in Pakistan is found near city centers, making it crucial to efficiently manage these capital resources. However, the poor handling and management of these resources in Pakistan, makes it a classic example of dead capital.

The term ‘dead capital’ refers to assets that are either underutilized or used for unproductive purposes. It is a phrase used by Hernando De Soto in his book, ‘Mystery of Capital’. Projects such as single-storey housing while the potential to construct high-rise buildings exists, or using land with a high market value at a prime location for non-economic activities are classified as dead capital.

During the last PM’s regime, it was revealed that the value of this dead capital, only in the urban areas is around Rs.300 billion. However, despite the acknowledgment, no action has been taken to reduce this constantly swelling number. The potential these properties possess is massive since they can provide much-needed stability to the country’s dwindling economy.

A substantial portion of this state-owned land is currently being used to provide housing and official residencies to the government’s employees. It has been brought to attention that the potential of this dead capital can be unlocked through the vertical expansion of these single-houses. The constructed houses can be managed effectively through the construction of 6 high-rise buildings, which will free up an estimated total of 77 acres of land.

Net revenue of Rs.52.2 billion can be fetched by the government if a step is taken forward in this direction. Added to that, not only will this step generate local economic activity but will also increase the GDP growth by 0.09% annually.

Proper management of the public assets can help achieve a lot more than just this, however. The government needs to be self-aware enough to take any further steps since, without its acknowledgment of the immense potential that resides within these assets, no substantial form of potential can be churned out through their utilization. Added to that, vertical expansion has become the only sustainable form of expansion to accommodate the ever-increasing population within Pakistan. Further horizontal expansion will only worsen the land scarcity and require a lot of green areas within the country to be wiped clean.

The direction suggested in this study will help reduce the property holding and disposing off underutilized public properties. Both the steps suggested are strategies that have been used by both developing and developed countries.

During 2010, a government property unit was set up by the UK with the aim of managing the estate efficiently. According to its National Audit Office (NAO) 2017 report, it raised GBP 2.5 billion by selling state land and properties. Furthermore, it even reduced the state’s annual spending on these estates by GB775 million.

In 2010, the UK set up a government property unit with the aim of managing the estate efficiently. According to its National Audit Office (NAO) 2017 report, it raised GBP2.5 billion by selling state land and properties. And reduced the state’s annual spending on these estates by GBP775 million. India recently announced a plan to sell state assets worth $81 billion within the period of the next four years.

It is also required by Pakistan to take such initiatives, helping it manage state-owned real estate efficiently and ensure the full utilization of all such resources. The government can form a database with a centralized record of the land, which is held by the state and its entities as well as the proportion of land. A part of the problem is also associated with the valuation of land held by the state, which currently ignores the market value and opportunity cost.

Currently, the unproductive land should be assessed by a team of professional asset management experts instead of civil servants so accurate figures can be produced for their value. After this, the land must be used for productive purposes instead so that it can be utilized in a way that its full potential is unlocked.